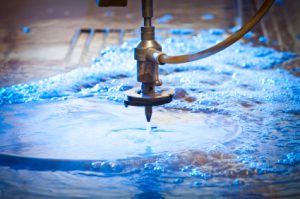 Conceptually speaking, take water’s inherent power of erosion and combine it with the principle of a band saw and you’d be well on your way to understanding waterjet cutting technology. Of course, that’s an oversimplified understanding of the technology. Waterjet cutting works by forcing a large volume of water through a small orifice or jewel nozzle creating a supersonic stream of water that is so powerful it can cut through materials in one pass without shredding or crushing them.

In some ways, the idea of waterjet cutting can be traced back centuries. After all, man has played with the idea of harnessing the power of water to accomplish engineering feats for centuries. From turning grain to flour, sawing logs into lumber, and generating the power to drive the industrial revolution, water has been a remarkable tool.

Yet, it was water’s natural power of erosion through which waterjet cutting was originally conceived. In the early 1800s, a form of hydraulic mining began when coal miners in New Zealand and Russia diverted pressured water from streams to carry away loose coal and debris. A few decades later in California, during the Gold Rush of 1849, water pressure was used to excavate gold from the soft rock for gold-hungry miners to pan. However, the method that narrowed jets of water for precision cutting was not developed until the 1930s. That was for a paper metering, cutting, and reeling machine which utilized a waterjet nozzle to cut at low pressure, and was restricted to soft materials like paper.

The technology rapidly evolved from the 1970s through the 1990s, but the process essentially remains the same as water erosion found in nature only accelerated and concentrated by orders of magnitude. Today, there are two types of waterjet cutting. The first, pure waterjet cutting, uses a high-pressure jet of clean water and is primarily used to cut soft materials such as rubber, foam or plastic. The second, abrasive waterjet cutting, requires an added abrasive, usually garnet, and is used to cut metals, stones, glass, and ceramics.

Its able to accomplish this cutting through an enormous amount of pressure.Waterjet cutting creates an intense cutting stream by focusing a jet of water at high velocity and pressure through a small, precious-stone orifice. Generally, the normal pressure is above 60,000 psi and up to 90,000 psi to produce the energy required for cutting. Water is then focused and the stream moves at a velocity of up to 3 times the speed of sound, depending on how the water pressure is exerted.

Because of its versatility and efficiency, the waterjet cutting tool is used in nearly every industry today. The Waterjet cutting systems provide optimum cutting productivity for many industries, including defense, aerospace, agriculture, food, glass, and stone.  It produces a clean cut with very close tolerance and almost no machining to prepare the metal. The exceptional edge quality that does not require a secondary finishing, making it one of the most versatile and efficient cutting processes available today. Waterjet is also a cold cutting process which means it is ideal for cutting metal as there are no heat affected zones on any part of the material.

Finally, there are multiple ways to calculate waterjet costs. However, the cost-effectiveness of waterjet cutting is best determined by production needs combined with the sheer variety of materials and thicknesses that can be cut on a waterjet. A waterjet cutting tool can cut production time, which can increase the number of parts that can be cut in one day, which can increase the profit that could be made from those parts. Using waterjet cutting allows for tight nesting of parts which saves on material costs. Finally, other cost-effective benefits include, cutting tolerances to .001”, burr-free parts, low contact force of the cutting stream, no heat affected zones, cutting of nearly all materials with no distortion or warping of materials, and a small kerf width to allow tight nesting and optimal material usage.

Contact Atlantic Stainless about your waterjet cutting jobs. We will use your design prints and custom cut your parts precisely to meet your exact specifications, exactly as you envisioned it.